Effect of sous vide on rind

Sorry for not posting an update sooner, but life can be quite the distraction at times. B)

So I hacked off an end piece consisting mostly of rind, with just enough inner meat to try a small taste. After a 3-hour sous vide bath I found that the rind had indeed softened up considerably and had become fairly pliable. However it was still far too tough and chewy to eat. The flavor actually was not bad at all, but it was impossible to chew and so had to be trimmed off. That said, I used the cut-into-steaks-before-trimming method, so I was able to be very conservative in my trimming and eliminate what needed to go by only shaving off the outer 1-2mm or so. In fact the vast majority of the trimming loss (which was ~33% of the post-aging weight) was due to the elimination of excessive outer fat rather than the rind. Here was the weight loss by phase:

Here are the steaks pre and post-trim, for comparison. As you can see there was an excess of internal fat as well, but there wasn’t much I could do about that. I may well try a Choice subprimal next time, rather than Prime: 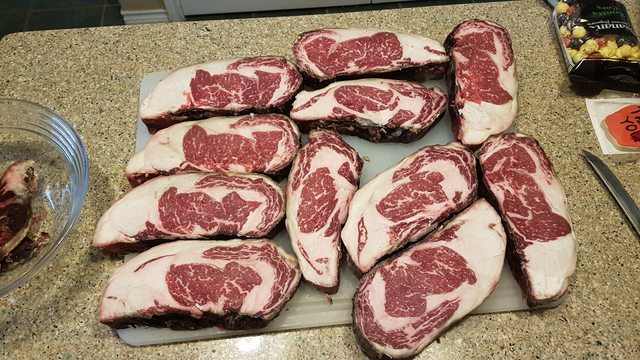 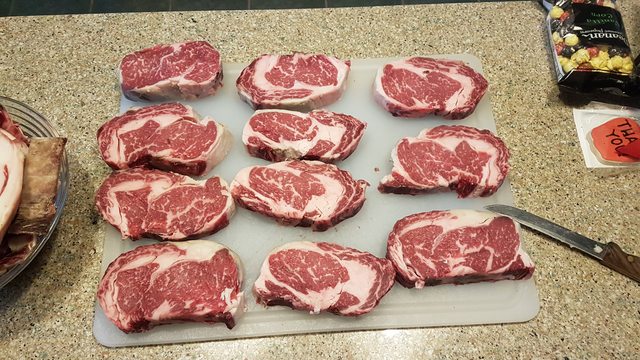 After 10 wonderful years, this forum was officailly retired at the beginning 2021. While there is no longer fresh content, the forum is full of rich information about dry aging and dry curing. As such, we decided to let the forum archives live on indefinitely so future meat crafters can benefit from its insight and wisdom. Thanks to all who have contributed, you've helped build a legacy!

We've got resources to help you! Check out the Help Section on our storefront, or join the UMAi® Salami, Charcuterie & Dry Age Meats Facebook Group.

Login to The Original Dry Bag Steak
Reset Password
Enter the username or e-mail you used in your profile. A password reset link will be sent to you by email.

When you visit our website, it may store information through your browser from specific services, usually in the form of cookies. Here you can change your Privacy preferences. It is worth noting that blocking some types of cookies may impact your experience on our website and the services we are able to offer.